When Western District schoolteacher George Rogers was transferred to Chelsea in 1912, little could anyone, initially, foresee the impact on Melbourne golf. During one visit to the Epsom Racecourse, however, he became aware of a beautiful, undulating tract of land.

Welcomed to the Chelsea State School by Headmaster Millar, Rogers beckoned to learn more about “Mayfield” – the 314-acre property he’d quickly become fixated upon. Millar obliged and arranged an introduction to a gentleman called Whitfield, who was managing the Mayfield Estate.

Rogers and Whitfield met over afternoon tea and, at one point during their meeting, the legal owner of Mayfield – “The Count” – made his grand entrance. Sparing the ensuing cut-and-thrust details, permission was granted to play over Mayfield. The next step was the formation of a golf club: golfing around Mordialloc was mainly confined to knocking a ball around the paddocks – the area now occupied by the Parkdale Railway Station.

A motion was passed on 17 July 1913, formalising the club name of Mordialloc Golf Club, and limiting its membership to fifty.

An early Melbourne professional, Rowley Banks, had made a study of golf courses, and so he was contacted to lay out nine holes in readiness for Opening Day on 6 September 1913.

Lauded greenkeeper at Royal Melbourne Golf Club, Mick Morcom, was commissioned to report on the conditions of the greens, and these were little more than rolled natural grass. He counselled the club upon proper manuring and other treatments.

Cattle and sheep grazed over Mayfield, wreaking havoc to its fairways and greens. Caddies spent much of their time diverting sheep away from the manure-scented greens; fighting a losing battle, the club was eventually forced to erect protective, wire fences.

The initial agreement with trustees prohibited traditional sand bunkers. To enhance the strategic merit of the course, wire-netting hurdles were erected and positioned across the fairways. Each obstacle rose to the equivalent height of just under one metre.

By 1917, the Club was anxious to upgrade its layout to eighteen holes. Club professional, Sam Bennett, laid out the new nine within a month. The breadth of golfing land was now 158 acres – a most reasonable parcel of land to ensure a solid foundation for the future. 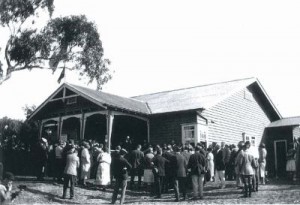 In 1921, the Club became serious about its bunkering, or lack there of, enlisting the advice of one Mr Plant, who had developed a reputation as a bunker expert. Plant’s recommendations were based on an aerial survey carried out by Hunter Rogers, whose action of isolating and recording all topographical features, and approaches to greens for each hole, was groundbreaking. Club lore has it that Rogers was the first in Australian golfing circles to successfully undertake such a survey. The planting of hundreds of native trees also took place in this landmark year.

When Mordialloc Golf Club became a company in 1925, the club embraced the opportunity for a name change. One early suggestion – “Braeburn” – gathered much support among the membership, but “Woodlands” – giving due acknowledgement to its parkland setting – was adopted.

In the mid-1920s, English golf architect, J.D.H. Scott, came to Australia and landed contracts at Sorrento, and various golf clubs throughout Victoria, including Stawell. A major assignment was Woodlands, where his advice was sought regarding course bunkering and the potential for some new holes.

Vigorous debate took place on how to best accommodate Woodlands’ expanding membership. The issue, however, was settled by an act of God – a huge fire gutted the clubhouse in February 1927. As it transpired, the estimated damage bill from the fire amounted to the same budgeted upgrade figure. And so serendipity played its beautiful part in the development of Woodlands Golf Club.

With the clubhouse issue sorted, one of the most progressive steps in Woodlands’ short history occurred in 1929 – the year its fairways were ploughed up and sown with couch grass.

The Annual General Meeting of 1933 was primarily framed upon the possibility of purchasing Mayfield. Representatives of the Fonseca Estate were prepared to sell at 11,000 pounds (which would compare to over $2 million today) – equating to nearly seventy pounds per acre. A sound offer, the Club agreed.

Mick Morcom’s wise counsel was called on yet again, and he approved the scheme of seeding the fairways with Chewing Fescue/New Zealand Brown top. Many trees were planted throughout 1933 and 1934, including flowering gums and wattles.

Being awarded the 1934 Victorian Amateur Championship was evidence of the esteem that the Woodlands layout was held in. To rise up in the relatively short time-span of twenty-one years from “golfing in the paddocks” to hosting the State Championship was a magnificent achievement. Today, Woodlands is one of Australia’s leading golf courses and, quite possibly, the most under-rated.

Befitting a course layout that demands concentration and an all-round game, many fine golfers have honed their skills at Woodlands and represented the Club with distinction at local, state and national competition. In recent times, various Men’s teams have savoured victory in Division One pennant, winning in 1995, 1996, 1998 and 1999. The achievements of two members, however, dwarf all others, namely, those of Margaret Masters and Stephen Allan. Joining Woodlands as a junior, Masters won the first of nine Women’s championships at age nineteen (1952, 1953, 1954, 1955, 1956, 1957, 1960, 1962 and 1963). Five Victorian Amateur Championships were annexed, along with the Australian, New Zealand, South African and Canadian Championships. Masters proudly recalls representing several Australian International touring teams, prior to being the first Australian woman to turn professional and compete in America, where she enjoyed considerable success. Masters has victories at two LPGA events and has been runner-up on five occasions. A member of the LPGA America (tournament division), she lives in Arizona.

Diminutive in stature and coined The Baby Face Assassin by the press, Stephen Allan’s career highlight is victory in the 2002 Australian Open at Victoria Golf Club. Turning professional in 1996, Allan qualified for the European Tour in 1997, and then won the German Open the following year. One stellar performance was heading the 2000 USPGA Tour School, perhaps golf’s greatest endurance test. Like Margaret Masters, Stephen Allan is based in Arizona, and has been a regular member of the US Tour. He, too, proudly represented Woodlands in local pennant, was a Victorian State Team representative and twice Club Champion (1991 and 1994).

The Club has established a Heritage Group with the general task of collecting and collating all historic items pertaining to the Club’s history. This will enhance the Club’s ability to record its history for the centenary in 2013.

If you have or know anyone who has had any connection with Woodlands and may have historic items of interest, the Club would appreciate hearing from you. Any contributions to the Club’s history will be gratefully received and acknowledged.